[Caveat — I can’t get the darn pictures to line up correctly with the type, so I’m sorry for the jumbled page.]

Last night was the big Dead Can Dance concert in Atlanta and it was amazing! My buddy Chris D, who drove down from Virginia, hooked up with me here in Chattanooga and we went down to our hotel in Atlanta late yesterday afternoon. After checking into our suite, we went to a local Italian place recommended by the hotel staff. It wasn’t bad. I had lasagna and I would give it a solid B grade. After dinner, we went back and changed into our Dead Can Dance t-shirts we’d gotten with the purchase of our tickets. Looking like concert twins, we left for the venue.

The concert was held in the Cobb Energy Performing Arts Center, where the Atlanta Symphony plays. It’s a three story marvel, very tall and high. Fortunately, we were in the orchestra section, down front. When we entered the center, Chris insisted on buying us DCD concert t-shirts, even though we were already wearing DCD t-shirts. I relented, cause he was as excited as a little kid. T-shirts in hand, we hit the bar, where Chris got a beer and I got a pinot grigio. 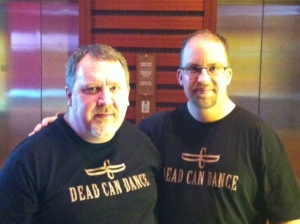 After a drink, we headed for our seats. We were elated when we were taken by the usher down to the second row, where our seats were practically dead center. It was virtually impossible to have had better seats! We giggled like school girls, knowing how close to the band we’d be.

An opening act came on at 8 PM, doing instrumentals to Arabic tambourines and Swiss drum-like instruments. Good world music. Finally, after a break, Dead Can Dance came on. Brendan Perry has aged, but looked great. He’s shaving his hair and his goatee is white now, but he sounds fantastic. And Lisa Gerrard was stunning! She wore a black outfit with a gold cape and she looked regal as she gazed out over the crowded audience, smiling the whole time. There was a backing band of three keyboard players, two percussionists, and a bass player, while Brendan played the guitar and Lisa played her odd instrument, the name of which escapes me — I think it’s a dulcimer. Since they’re supporting a new album — which is fantastic, and their first since 1996 — they did a lot of new songs. All told, I believe they did six songs from the new album and three other new songs I’d never heard before, one a Moorish song that was 800 years old and another a Greek tune from the 1930s. They opened with “Children of the Sun” from their new album, Anastasis, and it was pretty powerful. Here is a picture of the band.

DCD played several new songs to start the show off before going to one of their old ones, “Rakim.” Here’s a picture of Lisa singing “Anabasis.”

The band continued mixing new and old songs, but they didn’t play many of my favorite old Dead Can Dance songs, like “Cantara,” “American Dreaming,” “Salterello,” and “Carnival Is Over.” Oh well. Here’s a picture of them doing “Yulunga.”

One of the big highlights was of Lisa doing her classic, “Sanvean.” It always brings tears to my eyes, it’s so beautiful. It was an awe inspiring performance and I recorded it on my iPhone so I can always play it.

DCD ended their show with another song from the new album, it’s closing song, “All In Good Time.” They then left the stage. The crowded roared to its feet and exploded. The ovation lasted a long time before they came out for an encore. They played a rousing version of “The Ubiquitous Mr. Lovegrove” and another before leaving again. They got another standing O before returning for a second encore. This happened again, for a third encore, before the band gathered onstage to say their goodbyes and wave at us. Lisa blew the crowd kisses.

It was a glorious concert and Chris and I were elated that we had gone, that we had such good seats, and I was particularly thrilled because I had waited some 25 years to see them live. Kick that off the bucket list, I guess.  I’ve seen a lot of good concerts, some very good. Morrissey was great, The Cure played until 1 AM, I saw the Bauhaus 15 year reunion tour concert in Los Angeles, Nine Inch Nails was amazing, but this one was perhaps the best show I’ve ever seen. I’m only sorry my beloved Gretchen didn’t get to make the trip with us. Perhaps another year.

Speaking of Gretchen, there was a sobering note to the evening. She called me while I was in the venue waiting for the show to begin, distraught. Her car window had been smashed out and her purse stolen, with everything in it. It was terrible, and we’ve spent the bulk of the day making the bank, DMV, credit card, and new car window rounds. What a hassle, and it was very worrisome. Chris and I contemplated going back to Chattanooga early in the morning, about 1 AM, but Gretchen went over to my parents’ house to stay, so instead we left around 6 AM today and got back at 8. It’s been a full 24 hours. It was an amazing show.

5 thoughts on “The Dead Can Dance Concert”

The face behind the ramblings of the hankrules2011 blog

Author/editor of 65-75 books, more anthologies, textbooks, books attributed to me, rumored to be published, ghostwritten books, broadsides, art/text collaborations + adding dozens of technical/scientific books I wrote in a professional capacity for various companies ... closer to 150 books in my life! BUT... I'm more than just that. A polymath, I've always had far too many interests so in addition to writing/editing/publishing, I've studied and worked in network engineering, law, teaching, systems engineering, counseling, vinyl, science, computer science, foreign policy, religion, history, E/SE Asia, security, national defense, neuroscience, think tanks, contingency planning, analysis. I tell people I know a little about a lot and a lot about a little. Married to a wonderful woman, one little cat, moved close to 35 times, now an old curmudgeon who still loves hockey.