This is my 600th blog post on WordPress. Yay!

My wife is from Maryland and her parents, grown sons, and many friends still live there and she rarely gets up there to visit, so we went up last week for Thanksgiving. She had been looking forward to it for a long time. It was an 11 hour drive and we had to stop many times. It was grueling and tiring. As you know, I’ve long been suffering from severe head and back pain, so that made this trip difficult for me. Nonetheless, we got up there before 4 PM on Tuesday and met her parents for dinner. It was nice to see them and they were shocked to see how different we look from when we last saw them. Gretchen has lost about 35 pounds and I’ve lost over 70 pounds. After dinner, we went back to our hotel room and basically passed out. It had been a long day.

Wednesday we got up and had our own low carb breakfasts we brought with us. We then went to MarylandLive! Casino. Gretchen had never been to a casino before, had never gambled, which was bizarre to me, so she was excited. When I lived out west, I went to Vegas some two, three, or four times a year for many years. I usually stayed at the old Frontier, but stayed at other hotel/casinos too and gambled at most of them. I loved it! I had a good time and was a good enough blackjack player to usually be able to play for a long time and maybe make a little money. I’ve gambled in a few other casinos too, but Vegas is my favorite place. But I had not been in a long time. So I was rusty. The place was fairly big. Not very many tables, but a million slot machines. We decided to start off with that and break her in gently. And she did well! Won some money. Slots have never been kind to me; I’m a blackjack player. After awhile we walked around looking at the tables. Not many cheap tables. They had two $10 tables. That was it. Everything else was $15, $25, and $50 minimum tables. That ticked me off. I don’t have that kind of money to lose! At the Frontier in Vegas, where I used to stay, they had $1 and $3 tables. They were very popular. The other casinos had $5 tables. Caesar’s Palace had $10 tables. I realize that was a long time ago, but it gets worse. We went to eat lunch. We paid with the money Gretchen had made from slots. When we came back out, the $10 tables were gone and there were now only two crowded $15 tables. Everything else had been turned into a $25 table! Assholes! While Gretchen played quarter slots and won $40, I wandered around all the tables looking for an empty chair anywhere for a half hour. Finally, as I was about to give up, a seat at one of the $25 tables opened up and I jumped in! Then I found out why it opened up. The dealer was killing everybody. I got a 12 on my first hand and the dealer got a blackjack. Should have walked away then. I’m a fairly decent blackjack player. I’ve won some decent money at it and have been able to stay in games for many hours. The dealer demolished me on four straight hands. And everyone else. I hated her. She owned us. I finally won a hand. Someone else left and I quickly urged Gretchen to jump in cause she’s never played and I didn’t want her to leave a casino without having tried blackjack. So we both lost the next round. Then we each won a round. Then they changed dealers and everyone breathed a sigh of relief. But the new one was just about as bad. Won some, lost some. Finally we decided to leave while we still had something to leave with. When we cashed out our chips and slots credits, we ended up actually walking out of there with a little more money than we entered with, thanks to Gretchen’s great slots winnings. Seriously, that was the worst blackjack I’ve ever played! And aside from one time playing at a $100 table in Vegas, I’ve never played at such an expensive minimum table. Oh, and there were hardly any roulette and craps tables. That was really weird. Nonetheless, we left in the black and had a good time.

Later in the day, we met her friend Cindy and Cindy’s daughter Rachel and went to Captain Dan’s restaurant for some authentic Maryland crabs. Now, I don’t eat crabs. But Gretchen does. And like most Marylanders, she’s a crab snob. No crab outside of Maryland is worth a damn. So when we’ve gone elsewhere, the crabs have sucked. So she was really looking forward to this. The restaurant was pretty small and not very attractive, but you’re there to eat, so who cares, right? Rachel got a salad while I got a BBQ sandwich. Since I live in Tennessee, I know my BBQ, and this wasn’t very good. Nor was it very much. And it came with fries, but since I’m on a diet, I only ate three or four and was left hungry. Meanwhile, Cindy and Gretchen got crab pretzels and then got 12 crabs and went for it with gusto. God, it was messy! And when they brought the bill, I was stunned. Stunned. I never knew crabs cost so much. Especially since two of four of us just got $10 orders. That dinner cost a HELL of a lot! And the service was absolutely terrible. But Gretchen was very happy with her meal, so that’s what counted and she left happy.

Thursday was Thanksgiving. We started the day by going to her parents’ house to hang out for awhile. We had fun with them and then went driving around. She took me to the town she used to work in, which was a beautiful waterfront town, and we went to other places as well. Maryland is a really nice state. Finally, we went over to the townhouse her sons share. Her oldest son cooked and we four sat around enjoying a good, healthy meal (he had lost 60 pounds on a similar diet) while talking about all sorts of things. Then it was late and we had to get back to the hotel, so that was sad.

Friday we spent with her parents. They took us to the Eastern Shore across the terrifying five mile long Bay Bridge which I’ve heard about so many years. It actually didn’t bother me too much. At all. We met some friends at a Maritime Museum and saw what we could in the time we could and then we all went to lunch in this delightful small town. We had a really nice time, although parking was at a premium. Afterwards, we drove around some more and hit some more pretty towns. In one town, we went into an antique shop and I found the copy of Mao’s book on guerrilla warfare I just reviewed a few hours ago. It was pricey, but it was a valuable find and I was excited. As it was now nighttime, we went back over the Bay Bridge, which again wasn’t too bad, and went back to a restaurant near the hotel where we shared our last meal together and said goodbye. It was a little sad.

Saturday, we both got calls at 5:10 AM from our home alarm company telling us our living room motion detector alarm had gone off. We tried not to freak out, but they called the police and we waited. And heard nothing. We called the company back and they said they were waiting to hear from the police. Finally, after about 35 minutes, I called the police and talked to them. They said they found no signs of forced entry anywhere and no broken glass, no signs of disturbance anywhere and they had left and were now writing up their report. So that was good. But what set it off? And why? Frankly, we moved to that house last year in part because our old house was broken into and robbed two years ago and we didn’t feel safe, among other things. Our two cats could have been active, but the alarm company had assured me it would take something far heavier and bigger than cats to set that alarm off, so what was it? Were the police wrong? I texted three pet sitters we had working for us, far too early. I explained the situation and asked if someone could go over there early to check things out and make sure the cats were okay. Two of them did and reported things seemed fine. But by that time, we were underway, rushing to get home. And rush we did. We got home in about nine and a half hours, which was a record, and were damn glad to see the cats and house were okay. I still have no idea what set that alarm off, but I’m going to call the company today and talk to them about it.

So that was our Thanksgiving. It was tiring, but pretty good. I didn’t get too much head pain, thank God, not as much as usual, but I had a decent amount of pain and had to take pain medication, which tired me out. But that’s the norm. It’s good to be home and back to normal, but it was also good to get away and I know it was good for Gretchen to see everyone. Hopefully it won’t be so long before we can get back next time. 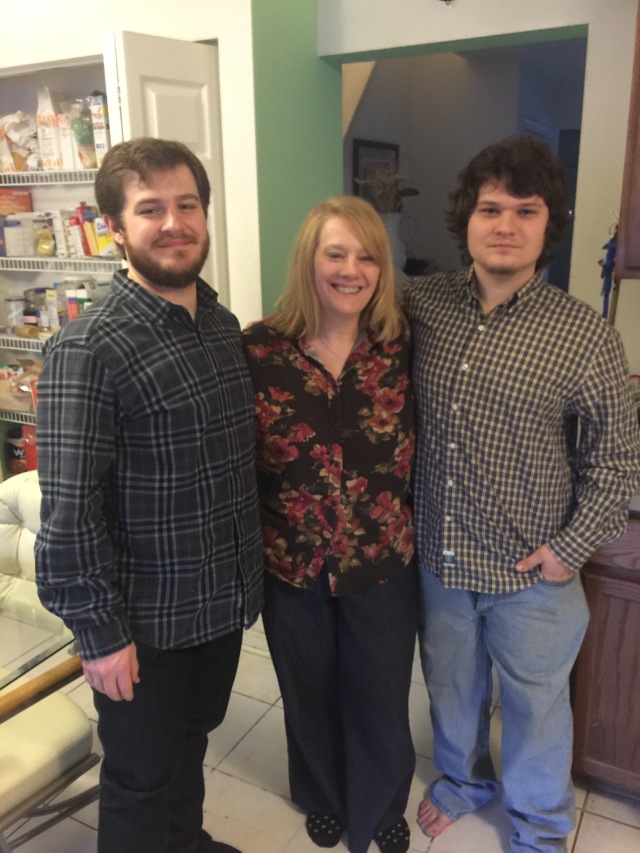 The face behind the ramblings of the hankrules2011 blog

Author/editor of 65-75 books, more anthologies, textbooks, books attributed to me, rumored to be published, ghostwritten books, broadsides, art/text collaborations + adding dozens of technical/scientific books I wrote in a professional capacity for various companies ... closer to 150 books in my life! BUT... I'm more than just that. A polymath, I've always had far too many interests so in addition to writing/editing/publishing, I've studied and worked in network engineering, law, teaching, systems engineering, counseling, vinyl, science, computer science, foreign policy, religion, history, E/SE Asia, security, national defense, neuroscience, think tanks, contingency planning, analysis. I tell people I know a little about a lot and a lot about a little. Married to a wonderful woman, one little cat, moved close to 35 times, now an old curmudgeon who still loves hockey.